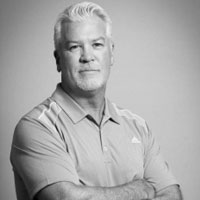 Dr. Pat Graham, BSc., DC., brings his NHL professional athlete experiences, as well as over two decades of serving as the Toronto Blue Jays Consulting Chiropractor, to Won For All.

Having played at the highest level of professional sport, Won For All leverages Pat’s elite athlete and business of sport experiences to help advance its game-changing leadership development, brand and change management programs, for active and former professional athletes, Olympians, and elite future stars. Contributing to the overall strategic global growth of Won For All, Pat will mentor athletes, foster athlete stakeholder relationships and strategic corporate partnerships.

Pat’s 5-year NHL career included a stint with his hometown Toronto Maple Leafs, as well as the Pittsburgh Penguins. His career was cut short due to chronic low back pain and eventually surgery. At only 23 years old he believed there had to be a better way to help people with chronic pain – he opted for a career in chiropractic. Today, he joins Won For All to help educate athletes that a fulfilling life after sport is possible, and how they can take steps to get there.

The Founder and Owner of the Core Optimum Health Centre, Dr. Graham’s successful transition from world-class athlete to doctor began with his graduation in 1988 from the University of Toronto, at St. Michael’s, with a Bachelor of Science in Human Biology. He then went on to graduate from the Canadian Memorial Chiropractic College in 1992.