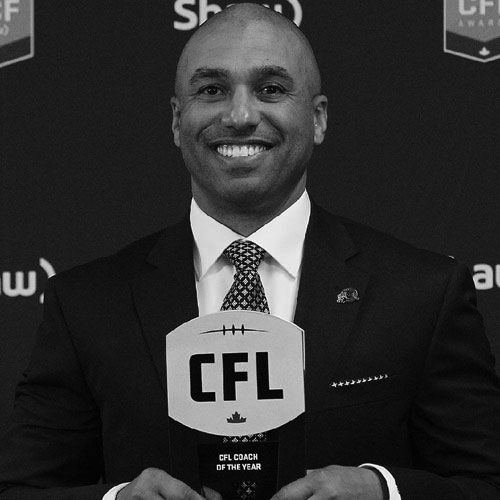 Orlondo Steinauer brings more than 20 years of professional football and leadership experience to Won For All. He played for 12 years professionally including two stints in the NFL. He is a 3x Grey Cup Champion and is recognized as an award-winning NCAA Division 1 and CFL Coach.

Renowned for his intelligence on the field, the Team Captain and Player Representative earned a reputation as an exceptional leader. He was named an All-Star at three different positions (cornerback, halfback, and safety), earning six East All-Star nods and five CFL All-Star honors in total. His 1,178 interception return yards are the second-most in CFL history. His remarkable achievements were acknowledged with his induction into the Canadian Football Hall of Fame – Class of 2021.

He was awarded the CFL’s Head Coach of the Year honor for the CFL’s Hamilton Tiger-Cats in 2019, where he tied the CFL record for wins by a rookie head coach (15), and was nominated as a top assistant coach while with the NCAA Fresno State Bulldogs. The Seattle, Washington native is also a Western Washington and Snohomish County Hall of Fame Inductee.

Over the years, “O” has worked for Sportsnet as their CFL Football Analyst and established ‘The Ozone 21,’ a foundation focused on single mothers and improving the quality of life for those less fortunate. With a belief that greatness extends beyond any game, he is an inspirational and influential leadership coach, speaker, and consultant, who is a great fit for the Won For All team.

“O” is also one of Won For All’s clients, and after having an ‘awesome experience,’ has leveraged that experience to continue to broaden his own career. Today, he also provides leadership, and executive coaching, helping people build a winning sustainable culture. He joins Won For All as a Managing Member, serving as a mentor to other athletes and a representative for Won For All’s game-changing services. He will assist in helping Won For All accelerate and execute its strategic vision of helping athletes be more than athletes.